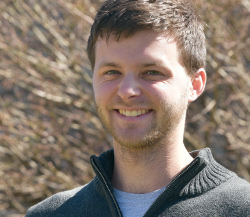 When Joel Heckmann needed to write a research paper on a “topic of interest” for his LCMS history class at Concordia Seminary, no subject immediately came to mind — until he mentioned the assignment to his grandparents, who suggested he look no further than his own family tree.

What began as a research paper turned into an inspiration for Heckmann, who is on track to graduate in May with a Master of Divinity. The seminarian was surprised to learn that his historic ancestor began pastoral ministry during a culture, as Heckmann notes in his paper, wrought with “Godless politicians and financiers, cheap thrills and
promiscuous men and women.”

“It doesn’t sound too different from today,” Heckmann said. 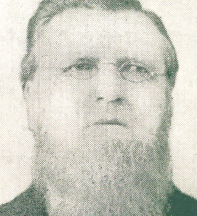 J.A.F.W. Mueller — whose many initials prompted colleagues to bestow the nicknames “A.B.C.” Mueller and the alphabet pastor — was ordained in 1847, the same year the Synod was founded.

This pioneering pastor served 53 years, a staunch advocate for youth and Lutheran schools and a tireless shepherd to congregations in St. Louis, Chicago, Pittsburgh and beyond, during what Heckmann describes as “dangerous and calamitous times.”

“In doing the research, I saw how much he did for the church, for the Synod and for Christ, and how he was loved by so many people,” Heckmann said. “The more I learned, the more I admired him and wanted to follow in his footsteps.”

Those footsteps can be traced to the log-cabin Lutheran school in Altenburg, Mo., started by emigrants from Germany who included Mueller’s family. In 1839 at age 14, Mueller enrolled in the first class, taught by C.F.W. Walther and other Synod founders.

After a theology program was developed to train pastors, Mueller eventually completed the program in St. Louis in 1847.

Heckmann calls his own path to the Seminary “completely different” from that of his trailblazing ancestor, who endured a rigorous journey to America and began his studies amid “suffocating poverty” and “pervading pestilence.”

Growing up in Sioux Falls, S.D., Heckmann enjoyed “helping out at church, going through confirmation and helping people in general.” He felt a pull toward the pastoral ministry during confirmation with his pastor and as a student in the pre-seminary program at Concordia University, Nebraska, Seward.

Heckmann’s paper provides interesting glimpses into the life and ministry of Concordia’s first graduate, including how:

Mueller died in 1900 after preaching at St. John Lutheran Church in Chester, Ill., where he had served since 1875. The procession of mourners stretched nearly a mile in a city with a gloom “as dark and deep as though a loved member of each family had been lost,” the local newspaper reported.

Following such an historic legacy feels “a little daunting,” said Heckmann, whose first call to pastoral ministry is fast approaching. But he credits “a host of amazing professors, classmates, family and friends” with helping him “not only learn more about my faith but also for equipping me with the tools I need to be a faithful and caring pastor.”

Bode, Seminary archivist and associate professor of Historical Theology, called Heckmann an excellent student and “fine young man. He is well suited to follow in the footsteps of his illustrious ancestor. Of course, I don’t have any historical evidence to support the claim, but I expect that J.A.F.W Mueller would be proud of him.”

Heckmann said he finds encouragement in his great-great-great grandfather. “He didn’t let cultural challenges bring him down,” Heckmann said. “He was a faithful pastor, kind and caring, who preached the Word of God with boldness yet in a way that people could understand.”

“What a great opportunity I have to continue his example,” said this future pastor, who looks forward to serving “wherever the church needs me.”

The @lwmlnational is hosting a Christmas open hous