Red paraments adorn the altar, lectern and pulpit at Concordia Lutheran Church in Fort Wayne, Ind. The congregation had observed Pentecost Sunday in the morning. Now it was 3 p.m. and a red stole lay on the altar for the afternoon service. Pastors with red stoles processed in. Joining the procession was Joseph Reineke, a recent graduate from Concordia Seminary. He was not wearing a red stole — yet. However, that red stole on the altar would soon lay on his shoulders, after he had spoken his ordination vows and the pastors had placed their blessings on him. 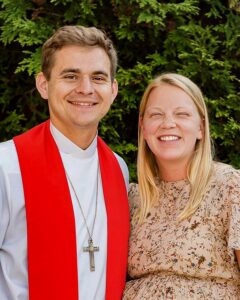 The congregation, with a worship attendance of more than 700, a Lutheran elementary school of 400 students and much going on during the week, needed a second pastor. Through a prayer-filled placement process, Concordia Lutheran Church now calls this new graduate of Concordia Seminary Pastor Reineke. On the Tuesday following his ordination, he and his wife, Emily, closed on their first house. Then on Wednesday, they welcomed their first child into their family, Sophia Christine, and on Saturday he preached his first sermon at Concordia Lutheran Church. What a week for the Reinekes and this congregation!

This scene plays out in congregations across The Lutheran Church—Missouri Synod (LCMS) during the summer months after Concordia Seminary’s May graduation service and April Call Day service. While Call Day is a time of great excitement and anticipation as the candidates learn where they will serve in the ministry, the summer brings the reality of family moving, house hunting and beginning in the pastoral office. Some will be called to team ministries, while others will be sole pastors in congregations without a pastor, including dual and triple parishes.

Concordia Seminary certainly meets the needs of the church by forming men to be pastors through our Master of Divinity (M.Div.) Program.

But not just in the M.Div. Program. The Seminary also serves the church by providing pastors and deaconesses through a variety of routes into the pastoral or diaconal office.

“Concordia Seminary is providing for the needs of the church and the world with which we live.”

For example, Alexandria Shick was placed this spring at Redeeming Life Outreach Ministries in Sanford, Fla. Trained in the Seminary’s Deaconess Studies Program, Shick will be the director of program ministries for a Christ-centered maternity home for single, pregnant women in crisis. Redeeming Life is a Recognized Service Organization of the LCMS, with programs designed to equip mothers with life skills for their future independence. This work will be rooted in Christ.

Shick served her deaconess internship at St. Luke’s Lutheran Church in Oviedo, Fla., and provided care to a retirement center, Lutheran Haven, and became involved with Redeeming Life on a part-time basis. Her husband, Samuel, served his vicarage at the same congregation. Samuel was called back to be an associate pastor at St. Luke’s in the same Call Day service during which Shick received her call. The two of them welcomed their first child, Simon, into their family shortly before their graduation from Concordia Seminary in May. Shick is well-prepared for this call and is eagerly looking forward to her consecration to serve in this vital position.

Once again, Concordia Seminary provides for the needs of not only the church but also those of the communities in central Florida. Shick will join with the rest of the staff at this specialized ministry, designed to bring hope-filled lives to young women and their children.

Reineke and Shick were residential students at Concordia Seminary. However, the next set of students were enrolled in distance education programs of Concordia Seminary. They took their classes online or during short intensive courses on campus, thus allowing them to continue to serve in congregations while preparing for the pastoral ministry. During their time in their respective programs, they are vicars, carrying out a variety of ministry activities. 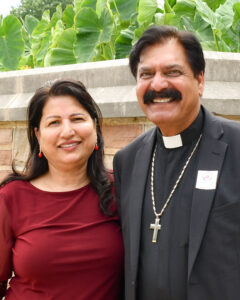 Rev. Jawed (Jay) Dass recently graduated from Concordia Seminary’s Ethnic Immigrant Institute of Theology (EIIT). EIIT seeks to form pastors for immigrant communities with a mission emphasis, especially for first generation ethnic populations and other culture-specific contexts. Most often the graduates of this program serve at congregations in the United States. However, Pastor Dass now serves in Pakistan as Pakastani national missionary pastor of the Lutheran Confessional Church of Pakistan, working to establish the Lutheran church in that country.

Dass grew up in Pakistan and moved to Florida in 1983 for better job opportunities. He entered EIIT in 2016 and his vicarage responsibilities included evangelism among Hindu and Islamic immigrants in Georgia. When the opportunity came to plant Lutheran churches in Pakistan, the LCMS Office of International Mission worked with the Evangelical Church of Lithuania to ordain Dass into the preaching office for work in this mission setting. He has already planted three churches in Pakistan!

Once again, Concordia Seminary provides not only for the needs of LCMS churches in the United States, but also in other countries. Because of his training through EIIT, Dass has established a confessional Lutheran presence through his mission work in a different cultural context. 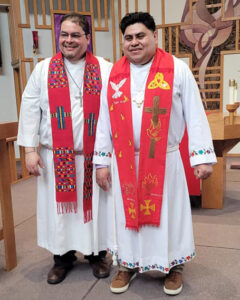 Ruberto Ek Yah graduated from the Seminary’s Center for Hispanic Studies (CHS). CHS carries out instruction primarily in Spanish (while encouraging students to be bilingual), and provides theological reflection and training for the rich diversity of the Hispanic/Latino culture. Ek Yah serves in the Spanish ministry at Trinity Lutheran Church in Portland, Ore.

Ek Yah is of Mayan descent and was born in the Yucatan Peninsula, Mexico. He learned Spanish and also is fluent in English. Besides the ministry at Trinity, he uses Facebook and other social media to communicate the Gospel in the Mayan language among immigrants in the area as well as to his Mayan homeland. He carries out this vital ministry while also working in another vocation to support himself and his family financially. Being bi-vocational highlights his strong commitment to bringing God’s Word to others.

Once again, Concordia Seminary provides not only for the needs of the English-speaking populations in the LCMS, but also for those who speak other languages. Because of his training through CHS, Ek Yah has joined others who have graduated from CHS to reach the growing numbers of Hispanic/Latino people in the United States. 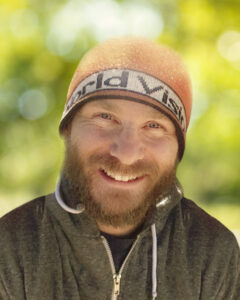 Joel Rockemann graduated this year from the Cross-cultural Ministry Center (CMC) located at Concordia University in Irvine, Calif. The CMC brings the efforts of Concordia University, Concordia Seminary and the LCMS Pacific Southwest District together to prepare men to serve in specific ethnic populations and multicultural communities.

Rockemann is the son of the former dean of student life at Concordia Seminary, Rev. Larry Rockemann. Before entering the CMC, Rockemann served two years of mission work in Haiti and then was involved as a layman at St. Paul’s Lutheran Church in Tracy, Calif. As part of his vicarage activities while taking his classes from Concordia Irvine, he initiated a conversational English class for the many Spanish-speaking immigrants in the area. The community deeply appreciates the classes and the shared meals that have been offered through St. Paul’s under his leadership.

Once again, Concordia Seminary provides not only for the needs of the traditional culture of LCMS congregations, but it also prepares men to serve in cross-cultural settings. Through his call to St. Paul’s Lutheran Church, Rockemann joins other CMC graduates who are a significant part of our church’s effort to reach different ethnic communities.

Scott Magneson has received his call to serve Light of Christ Lutheran Church in Marysville, Mich., which was announced in the Seminary’s Chapel of St. Timothy and St. Titus June 24. He is a student of Concordia Seminary’s Specific Ministry Pastor (SMP) Program. For the last two years he has served as the vicar at Light of Christ and, once ordained, will continue to take classes for two more years to complete the program. The SMP Program prepares pastors who are already in an existing ministry or mission context to serve as pastors in that particular ministry for the duration of their pastoral ministry.

Light of Christ is a small congregation that struggled to call a full-time pastor. Magneson joined Light of Christ shortly after its founding in 2011, and, when he retired from teaching at a high school in 2015, the members of the church encouraged him to enter the SMP Program. He did, and he now serves this loving, small church family, carrying out the full range of pastoral responsibilities. Magneson and his wife, Sandy, have two grown children and twin granddaughters. He diligently seeks to carry out the church’s vision of “CONNECT with God, GROW with others and SERVE the church and our community.”

Once again, Concordia Seminary provides for the needs of congregations, this time for those parishes that otherwise would be unable to afford a full-time pastor. Because of his SMP training, Magneson joins others from this program who are now serving a variety of church settings from small churches to team ministries to church plants to campus ministries.

I am the director of Placement at Concordia Seminary. In that position, I am privileged to facilitate these calls into the pastoral and diaconal ministries. The residential students I know well, and the distance students are well taken care of by the various program directors. During Call Day services throughout the year, I have the distinct joy and honor of announcing the calls for our students who will be pastors and deaconesses. With each name I call out, those who are present in the chapel are hearing once again how Concordia Seminary is providing for the needs of the church and the world with which we live.

Dr. Glenn A. Nielsen is professor of Practical Theology, director of Placement, director of Vicarage and Deaconess Internships, and director of certification at Concordia Seminary, St. Louis.