Teklu Ketema eagerly awaits the announcement of his vicarage in 2018. Photo: Sid Hastings

Some call the highlands of Ethiopia the cradle of civilization. Teklu Ketema, a Concordia Seminary Master of Divinity (M.Div.) ’20 graduate, calls it his first home. Deep within its rugged mass of mountains, Teklu, the son of hard-working farmers, grew up planting, nurturing and reaping the yearly harvest.

Baptized in the Eastern Orthodox Church, Teklu attended mass with his family and listened to services spoken in ancient languages that were difficult to understand. When he was old enough, he moved to Addis Ababa to live with his aunt and attend high school.

“I started attending Campus Crusade, a Christian fellowship. When they started talking about salvation, I became defensive,” Teklu says. “I thought I was a Christian. I had no idea what they were talking about, since I never heard about ‘salvation.’ I started reading the Bible. As I read Acts, I began to learn about God’s free gift of grace.”

Soon thereafter, with his newfound understanding of grace, he joined an evangelical Lutheran church. But it came with a cost. His family members, including the aunt he lived with, rejected him because he had left their church.

As a result, Teklu had to move out of his aunt’s house and live with friends as he finished high school. He continued going to the Lutheran church, studying the Bible and, at 17, was confirmed in the Lutheran faith. Since he was now paying for his own education, he worked as an interpreter with missionaries through college. And God provided through the difficulties.

“I discovered that I didn’t like the business world. … I wanted to share the Gospel with people.”
– Teklu Ketema

Teklu transferred from Addis Ababa University to Evangelical Theological College, also in Addis Ababa. “I discovered that I didn’t like the business world,” Teklu says. “I could do it for the money, but I didn’t want to work for just money. I wanted to share the Gospel with people.”

In 2001, Teklu created Care for the Poor, a ministry that served the city’s eastern slums. Its mission was to uphold the Great Commission and the command to love your neighbor as yourself. Care for the Poor provided numerous services to those in need, from medical attention to job training.

One extraordinary story of this holistic ministry involved a man named Alemu. “Alemu was bedridden,” Teklu recalls. “He had given up, saying that he was going to die. ‘We can help you,’ I told him. ‘No, I am almost dead,’” Alemu told Teklu. “Don’t worry with me.”

Teklu took the man to the hospital. Alemu eventually got better, but he couldn’t resume his former job as a driver. Through Care for the Poor, Alemu received training and secured a well-paying job as a plumber. Having regained his health and income, Alemu asked to volunteer for Care for the Poor on the weekends. He wanted to give back.

Teklu continued reaching people through Care for the Poor for eight years. He also met his future wife, Tsion Endalkachew, who served as a nurse at the ministry.

Tsion grew up in America, and she and Teklu decided to return, specifically to Apex, N.C., where Tsion’s parents lived. Within two weeks of arrival, the couple was married. They received permanent resident status in the United States in 2008 and became citizens in 2010.

“When I moved here, I knew it was going to be different, but I underestimated just how much,” Teklu recalls. “I was in culture shock, but I sought to learn more about American society.”

The couple had two children: one in 2009 and another in 2011. With the economy depressed by the Great Recession, jobs were hard to come by. 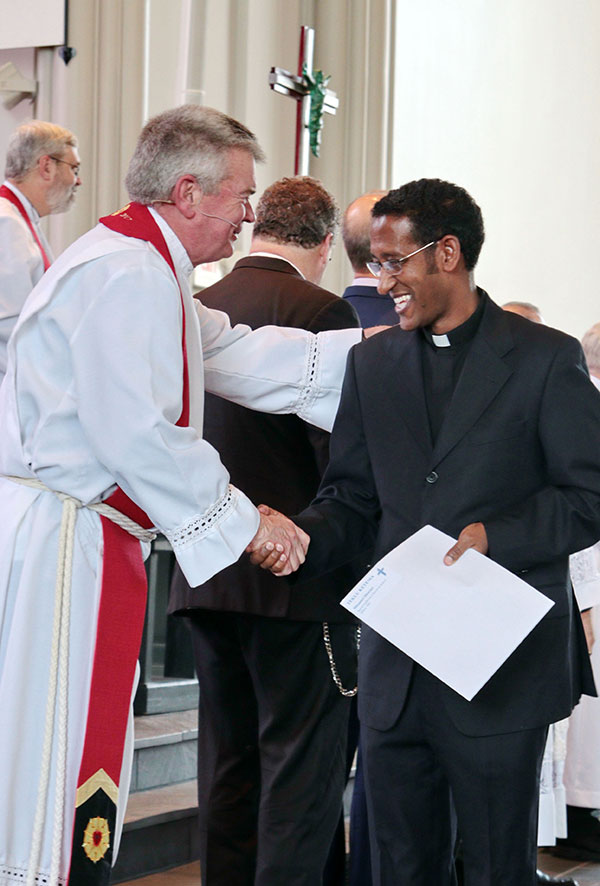 “I prayed and talked to my wife, and everyone from my church was telling me to serve God,” Teklu says. “I have been Lutheran since I was 17. I knew I wanted to go to a seminary of The Lutheran Church—Missouri Synod (LCMS). We decided on Concordia Seminary for many reasons including my wife’s job as a nurse. St. Louis has lots of opportunities in the medical field.”

The couple moved to campus in 2016 and Teklu began his studies to become a pastor. Throughout his four years of study, he has appreciated the encouraging and devoted professors he has had. “The Seminary professors are so knowledgeable, but also down to earth at the same time,” he says.

“It is important for everyone to know what their purpose is and what God has given them. I am trying to bring the Gospel and Scriptures in that context.”

While pursuing his M.Div., Teklu longed to visit his family in the Ethiopian highlands as they were no longer estranged from one another. Unfortunately, he was unable to make it back home before his mother, a member of the Orthodox church, died. Soon thereafter, his father became ill. Thankfully, Teklu was able to travel to Ethiopia and visit him in the hospital. Over the course of a month, Teklu shared his faith with his father. Even though it was a dark time, Teklu is grateful he was able to see his father before he died.

This summer, Teklu was ordained and installed at St. Paul’s Lutheran Church of Gambrills/Crofton, Md.

His hopes are high for his future ministry. “There is an African population nearby — people who came for the American dream. But their children are leaving the faith. They are affected by the world and that is very sad,” Teklu says. “I hope that at St. Paul’s we can have an outreach program for young people so that we can share the Gospel and help them find the purpose in their lives. I want to provide answers to questions such as ‘Why did God create us?’ ‘Why are we living?’ ‘Why did Jesus die on the cross and what does that mean to me?’ It is important for everyone to know what their purpose is and what God has given them. I am trying to bring the Gospel and Scriptures in that context.”

Meet: Dr. David Maxwell. In this issue of Concordi