Dr. John Loum, former director of the Ethnic Immigrant Institute of Theology (EIIT) at Concordia Seminary, St. Louis and missionary to The Gambia, entered rest in Jesus Oct. 26, 2022. He was 74 years old.

Visitation is set for 4-7 p.m. Friday, Nov. 18, at Timothy Lutheran Church, 6704 Fyler Ave., St. Louis, MO 63139. A funeral is scheduled for 10:30 a.m. Saturday, Nov. 19, at Timothy. Burial is set for Our Redeemer Cemetery, 8300 MacKenzie Road, St. Louis, MO 63123 immediately following the funeral. Members of The Lutheran Church—Missouri Synod clergy are invited to vest in red stoles and be a part of the procession.

“Dr. Loum’s commitment to sharing the Gospel of Jesus among African immigrants in America, and among immigrant communities from all around the world, has yielded remarkable fruit — fruit that will last,” said Dr. Thomas J. Egger, Seminary president. “We are grateful to have had John as a colleague and a brother, and we pray that the Lord will comfort John’s family and all who knew and loved him, and that God will continue to bless and further the Gospel outreach efforts among us for which John labored so diligently and joyfully.”

Loum served as the director of the EIIT beginning in 2006. When first named to the position, he said he was looking forward to “a fruitful and blessed ministry.” He served as director until 2020.

The EIIT Program is a specialized program leading to ordination for men engaged in pastoral ministry contexts in ethnic immigrant and urban cultures in North America. EIIT also offers a program for women to become deaconesses. During Loum’s tenure as EIIT director, he guided many missionary pastors and deaconesses.

With a wealth of knowledge about Islam and numerous years of experience working with Muslims in Europe, Africa and the United States, he was passionate about sharing the Good News of forgiveness and eternal life in Jesus with Muslims. At the Seminary, he organized several continuing education workshops and other educational sessions for seminarians to better understand outreach among Muslims.

In 2017, he began serving as a part-time missionary to The Gambia, his home country, on behalf of a partnership between The Lutheran Church—Missouri Synod (LCMS) and Concordia Seminary. He was the first LCMS missionary called to The Gambia, a predominantly Muslim country in West Africa. “It was God’s idea, because He planted it in my heart,” Loum said at the time.

Until 2020, he spent several months of the year teaching Lutheran doctrine to an established group of Christians there. Along with teaching and catechizing the pastor and lay leaders of the church in The Gambia, he also instructed the teachers and students of the Lutheran school in the village of Abuko.

“I’m cut out for this,” Loum said in 2017. “I’m a missionary. I was brought to faith by the mission agencies, so I feel everything about me is about missions and sharing the Good News of Christ.” 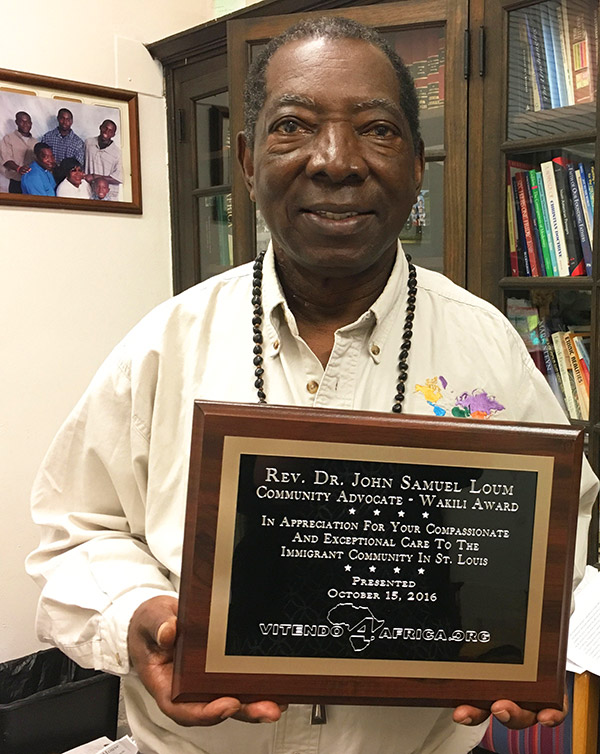 Loum, who grew up in a Muslim family in The Gambia, West Africa, learned about Jesus at the age of 17 from a missionary based in Nigeria. Loum adopted the missionary’s name, John, and left The Gambia after he converted to Christianity and was persecuted by his family. Loum received seminary training from Sierra Leone Bible College, West Africa (1970), and Immanuel College, Ibadon, Nigeria (1976). He received a diploma in Islamic studies from Birmingham University, England (1982); a Bachelor of Arts with honors from the University of Oxford, England (1986); a Master of Arts from Hartford Seminary, Hartford, Conn. (1995); and was colloquized by committee and certified in the LCMS (1999). He earned a Ph.D. in missions from Concordia Theological Seminary, Fort Wayne, Ind. (2012).

Before joining the Seminary staff, Loum served as pastor of St. Augustine Lutheran Church in Fort Wayne, Ind., and as a missionary-at-large to African immigrants in the LCMS Indiana District.

In 2016, Loum received the Wakili Award from Vitendo 4 Africa for community advocacy and “compassionate and exceptional care to the immigrant community in St. Louis.” He volunteered with Christian Friends of New Americans, including serving as vice chairman on the organization’s board.

During a 2019 video interview with Seminary President Emeritus Dr. Dale A. Meyer, Loum lifted up the recruitment of ethnic people for ministry vocations.
“That’s the way of the future,” he said. “The ethnics are here to stay and we need to bring them into our Lutheran church because of the purity and inerrancy of the Gospel. That’s what our people are looking for.”